On December 20, 2014, at approximately 1:00 to 2:20 am, two suspects burglarized a tire shop located on the 400 block of Victory Avenue.  The two suspects entered the business by shattering and entering through a window to the west wall of business. The suspects stole cash, tires, and a camera. Camera footage showed two light skinned, possibly white or Hispanic males stealing the items. The suspects fled in an unknown direction via unknown means.

Surveillance footage from December 17, 2014, showed two male subjects associated with a red truck, which appeared to be a 90's model Dodge Ram (plate not visible). One subject had long hair, which was similar in appearance to Suspect #1. The owner of the shop advised these subjects were at the shop for approximately an hour and wandered through the garage looking at tires in the same area the tires were stolen from.

The subjects depicted in this photo are subjects of interest and wanted for questioning.  Anyone with any information on the truck, the depicted subjects, or the case is encouraged to contact the South San Francisco Police Department via the TIP report line at (650) 952-2244. 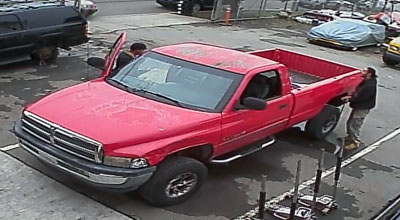