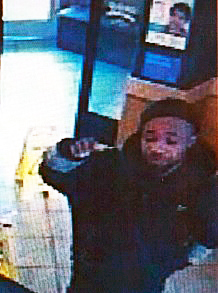 The pictured suspect was positively identified in a window smash auto burglary that occurred on January 11, 2015 at a restaurant, located at the 300 block of South Airport Boulevard.

The suspects were last seen driving away from the scene northbound Highway 101 in a silver SUV with a possible Arizona license plates.