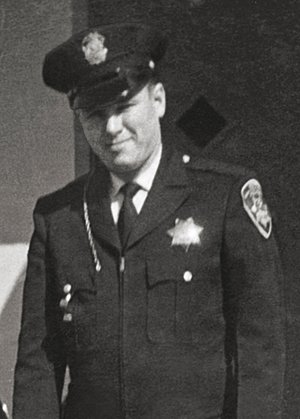 Arthur William Moyle served on the USS Cleveland, a navy cruiser in the South Pacific, during World War II.  Moyle started his career as a full-time Police Officer with the South San Francisco Police Department on April 13th, 1953.  Officer Moyle was 27 years-old and had only been on the force for three weeks when tragedy struck.

On May 4th, 1953 at 0230 A.M., Sergeant Silvio Stagnaro and Officer Moyle responded to the scene of a traffic collision where a vehicle, driven by Mrs. Bobye Hutslar careened from a South San Francisco service road onto the Bayshore Freeway (U.S.-101).  In order to access the traffic collision scene, Officer Moyle and Sergeant Stagnaro responded onto the freeway.  Once they arrived, they found Mrs. Hutslar’s car blocking a lane of traffic.  Sergeant Stagnaro was speaking to Mrs. Hutslar while Officer Moyle was standing next to his marked patrol car trying to place warning flares.  Officer Moyle was also waving a flashlight to direct traffic away from Mrs. Hutslar’s vehicle.

It was at this time that a vehicle being driven by Janet Holman, age 23, came speeding towards the scene.  Sergeant Stagnaro saw the approaching car and yelled out to Officer Moyle to look out, but it was too late.  Despite the flashing red emergency light on the patrol car and Officer Moyle waving his flashlight, Ms. Holman failed to see them.  Ms. Holman’s car struck the stalled vehicle and then struck Officer Moyle.  Officer Moyle was dragged approximately 300 feet from the point-of-impact and was killed instantly.  Mrs. Hutslar was also injured as a result of the secondary collision and sustained life-threatening injuries.  Sergeant Stagnaro was uninjured.

Two California Highway Patrol officers driving on the freeway and had spotted Ms. Holman’s speeding car just moments before the collision.  The CHP officers clocked Ms. Holman at 80 MPH.  The CHP officers were preparing stop Ms. Holman’s vehicle, but the fateful collision occurred before they could intervene.  Holman was charged with vehicular manslaughter.  CHP officers later testified that Holman appeared to be intoxicated at the time of the collision.  Holman, the daughter of a wealthy and prominent San Francisco insurance executive, was ultimately convicted of misdemeanor vehicular manslaughter and fined $750.  A coroner’s inquest determined that Holman was responsible for Officer Moyle’s death as a result of her negligent driving.